The first of many vests

One of the main projects I've been indulging in over the last 10 months has been crocheting vests.  And vests.  And more vests. 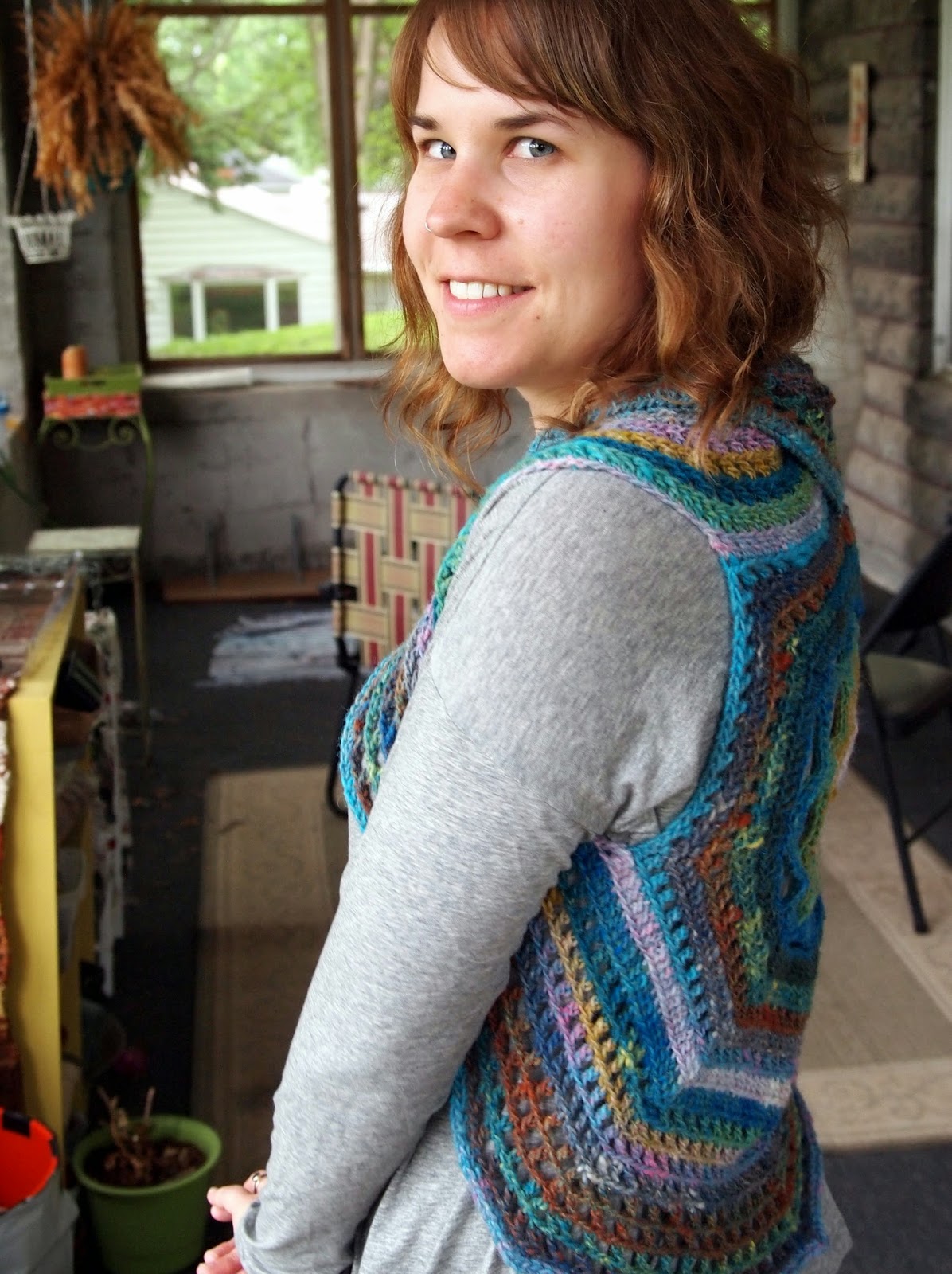 It started with a trip to a yarn shop in Seattle on our honeymoon where I bought some wooly yarn on clearance.  I didn't know what to do with it, but I decided after a few weeks that I wanted to make a vest.  Now, let me say, at this point in time I was not a super proficient crocheter (nor would I argue that now, even).  I made stuff, but I'm not a pattern reader and most of my projects involved straight lines or squares.  So, this vest thing was a whole new undertaking: CROCHETING IN THE ROUND. 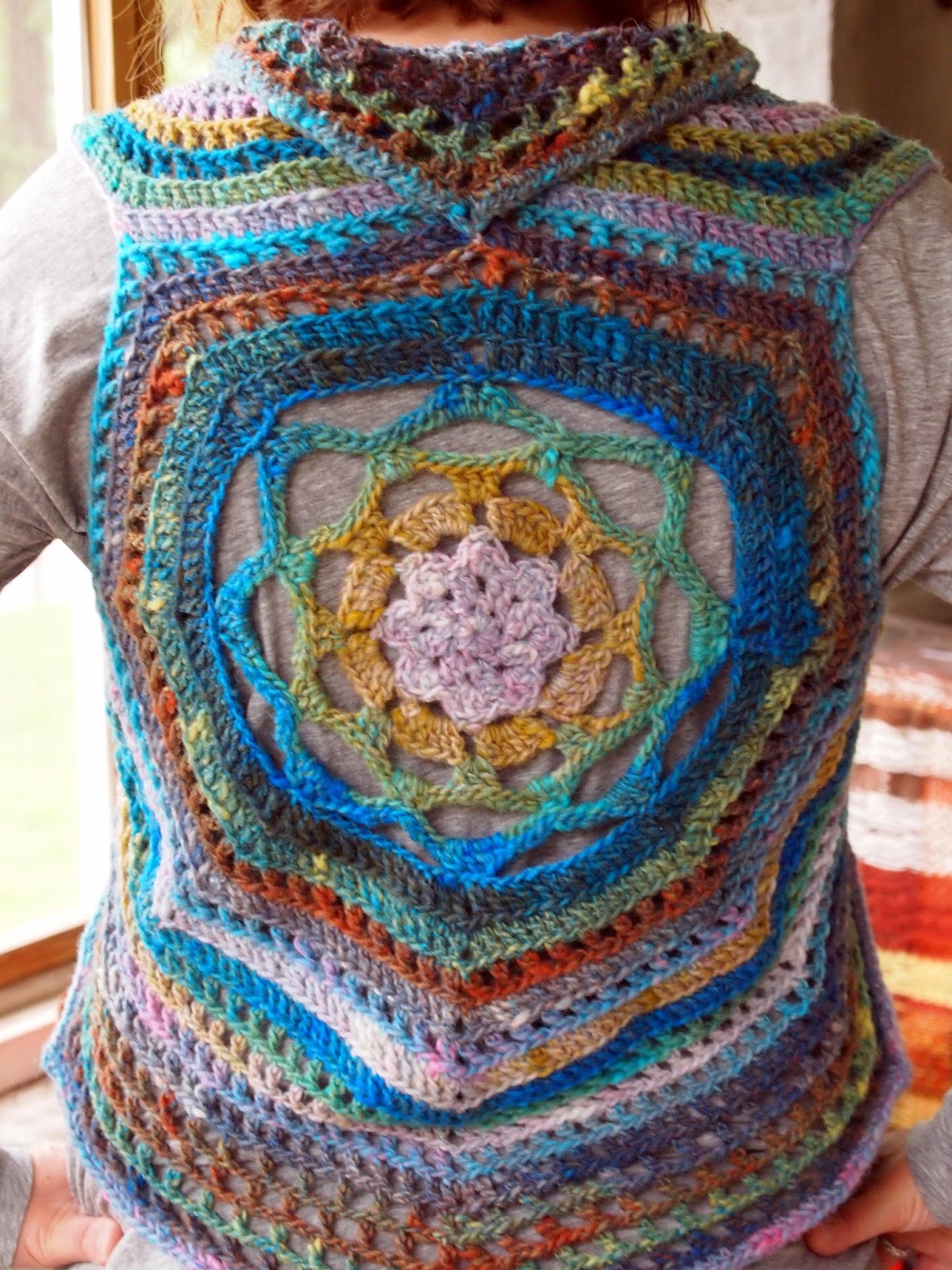 Some how I figured it out.  It wasn't immediate, but I got it.  The first attempt took a lot of ripping out stitches and reevaluating why I'd decided to pursue this type of a project.  It wasn't perfect when it was done, but I liked it and I felt proud of this new pattern I'd begun to create. 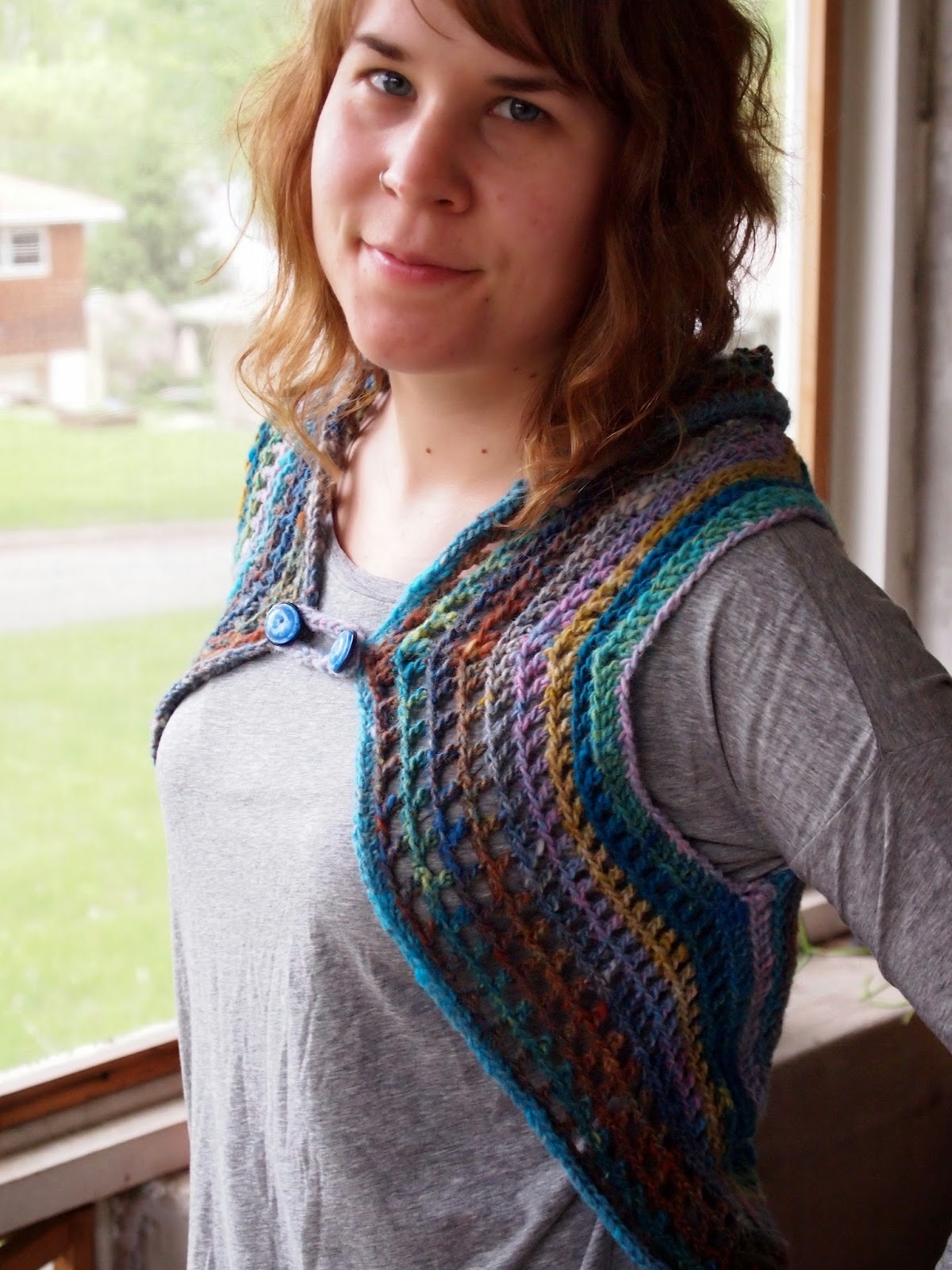 Since, then, my pattern has evolved and been developed to the point where I can generally produce something I like on the first try.  It's faster, although still time-consuming.  I've also sold many of my creations, which feels really good.  Not for the money, but for the opportunity to have someone else appreciate my work.
Posted by Karen at 8:50 AM 23 comments:

Well, it's really been a long time since I've blogged on here regularly.  It wasn't a conscious or intentional decision on my part, but it just wasn't fitting in with my life for a while.  I was busy with grad school, planning our wedding, crocheting, and life in general. 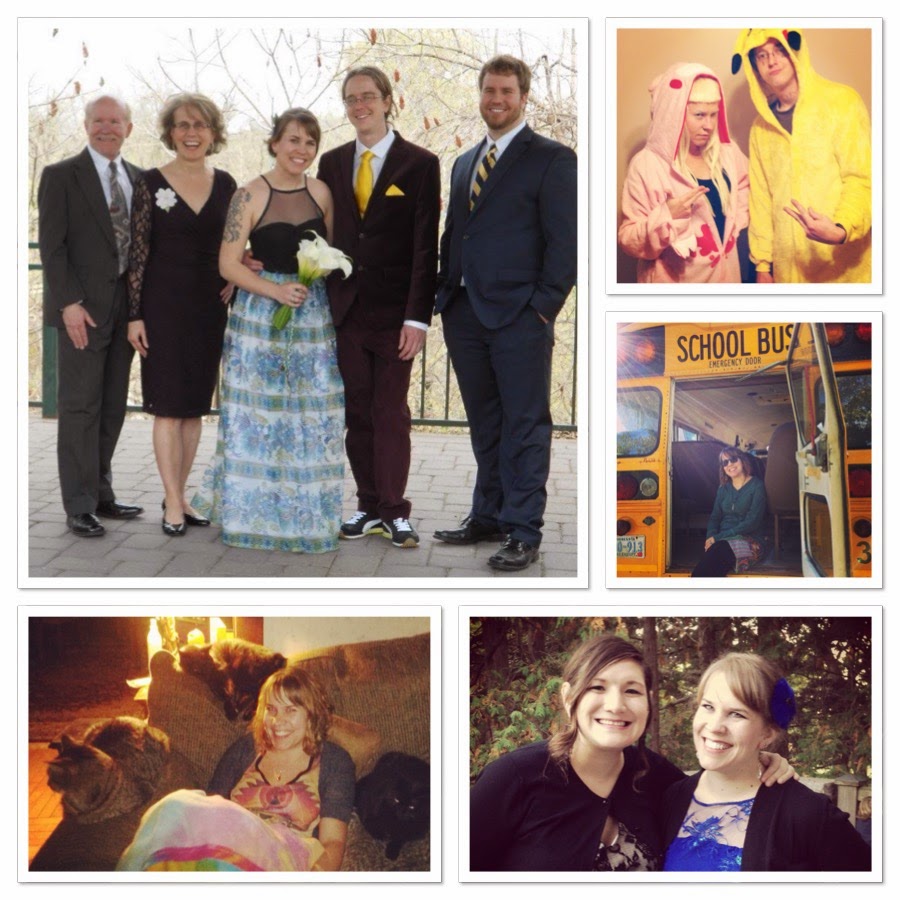 I noticed that I was getting really hung up on other bloggers' lives as well; what they were doing, how they wrote, how many followers they have, etc.  I was also planning my life around my blogs... I took pictures, cooked, dressed, and crafted so I could post.  It wasn't the way I wanted things to be, so at some point I just stopped logging on and checking my account.

Despite that, I feel like I'm ready to come back now.  My creativity has shifted and I've been making what I want to make, rather than just creating things so I have something to show.  A lot of the time I end up posting pictures of my work on Instagram and Facebook, but I feel like those aren't always the best outlets.  So here I am, back in the world of blogging and excited to share what's been happening in my world. 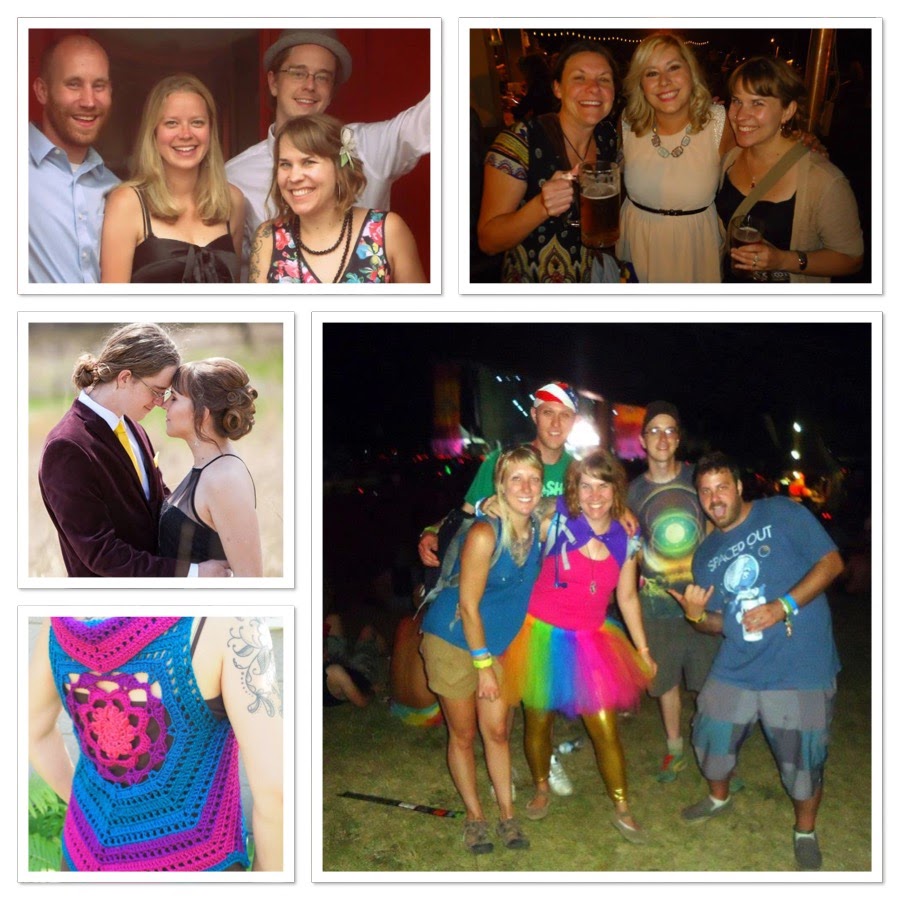 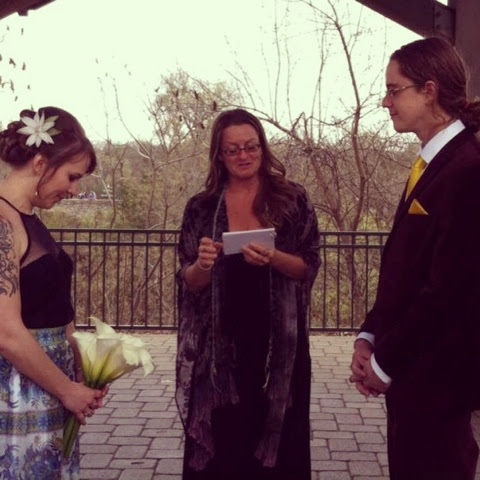 Now that the crazy year of planning is done, I hope to share more about our day soon!
Posted by Karen at 11:11 AM 6 comments:

A few months ago I had a nice break from classes, and decided to pursue a new craft project- an infinity scoodie.  I wanted to make my own pattern and after some trial and error, pulled it off!  A friend saw mine and asked for own of her own and it turned out so good.  Here are some pictures of the final result of what I made for her: 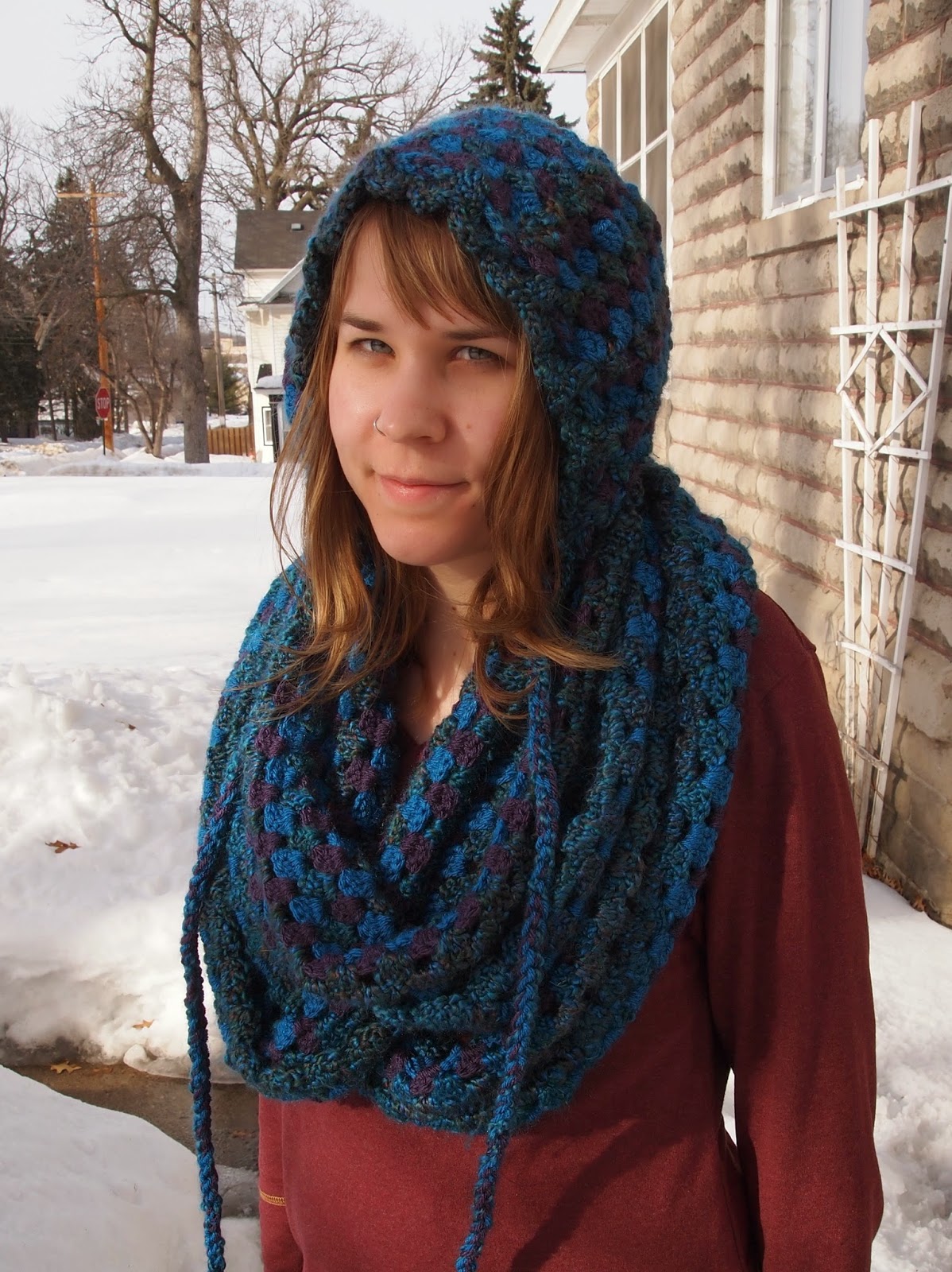 Nicole picked some colors that I wouldn't have chosen on my own, and they were so perfect!  After I started, I couldn't get over how much I loved them together.  The yarn I used is super soft and the whole piece is really comfortable to wear. 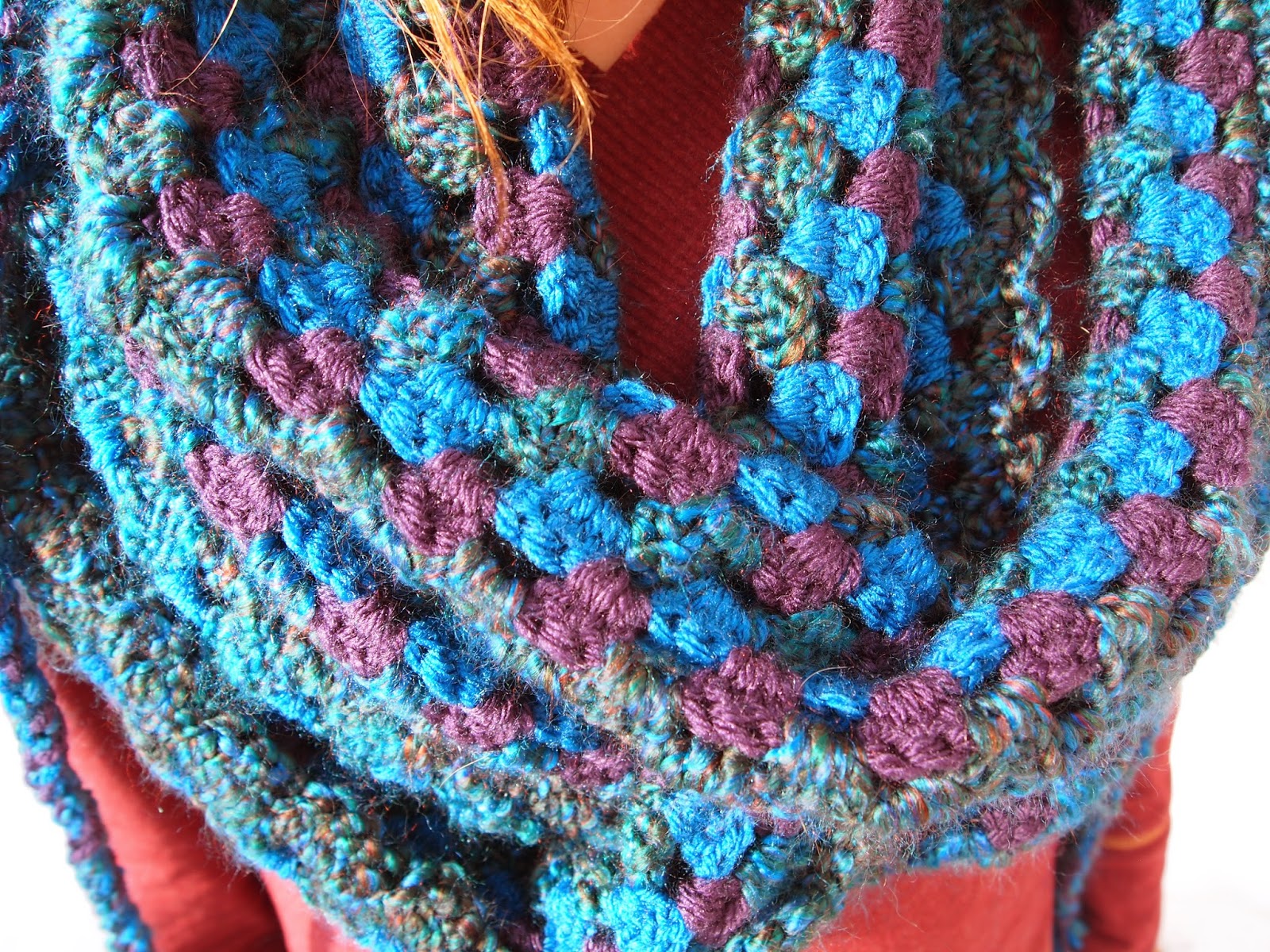 I added some details that weren't on my original, including a cord with tassels to tighten the hood and a satin liner to help give the hood shape and for more warmth. 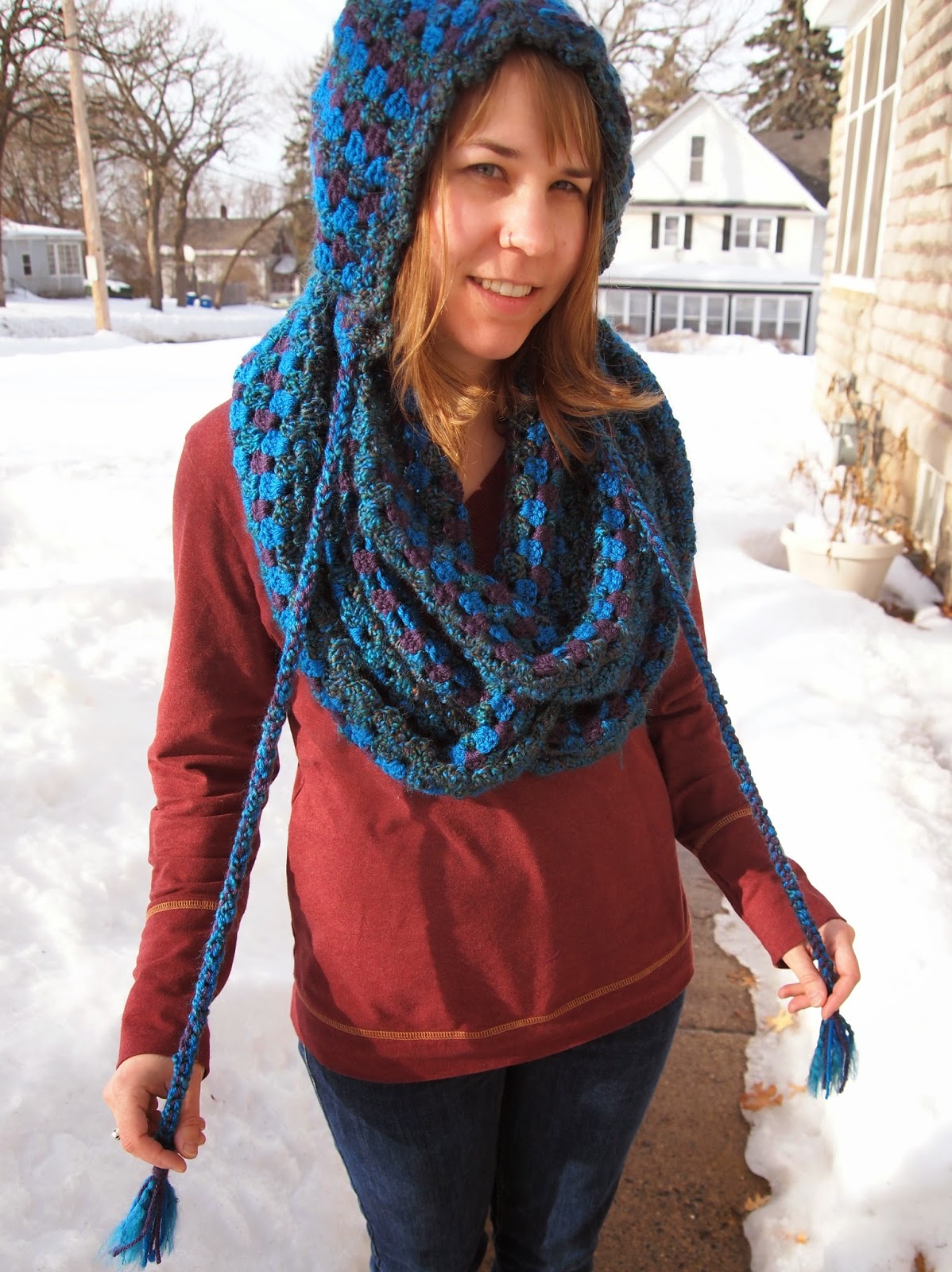 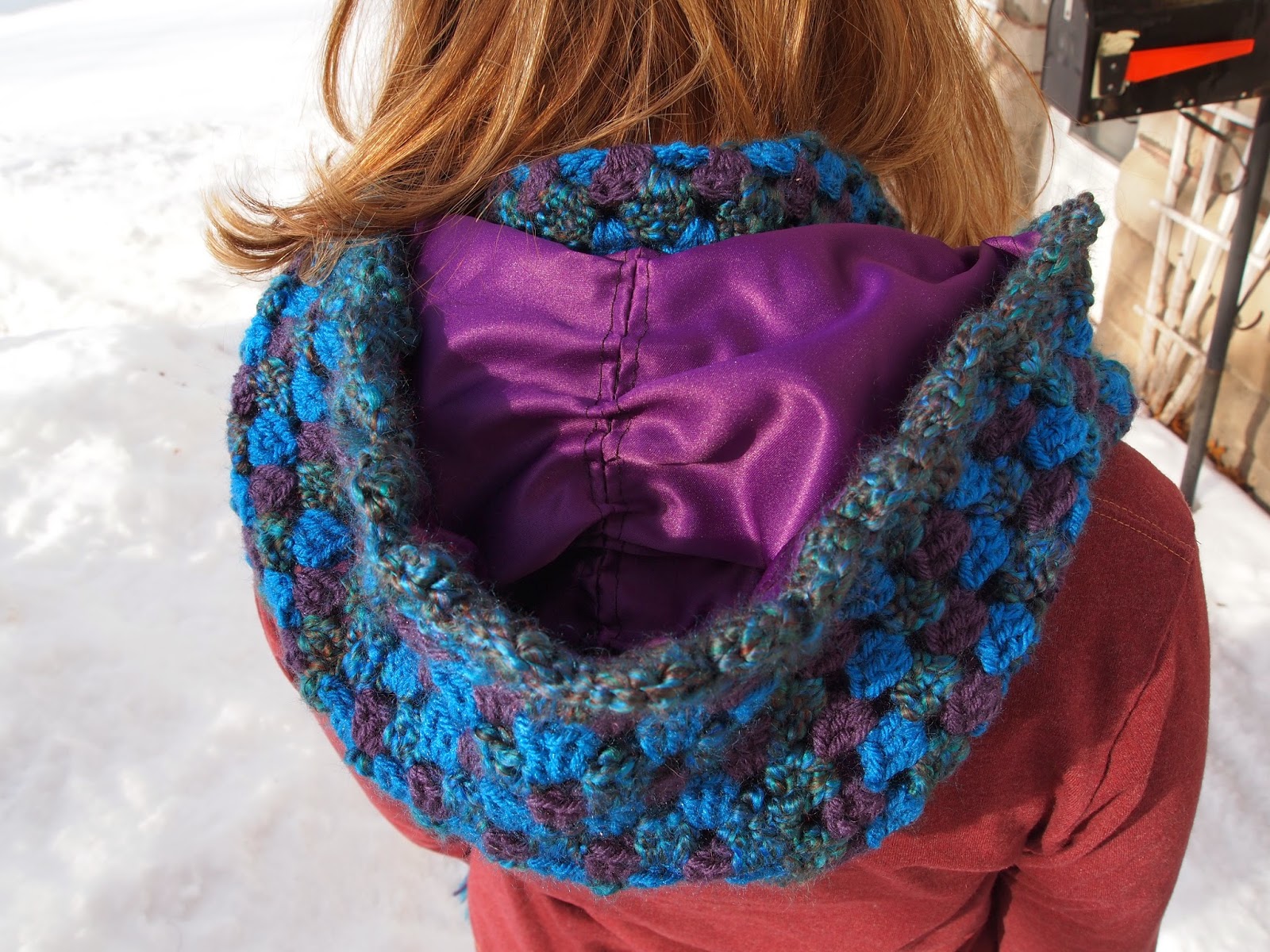 The scarf part is really long (it reaches the ground when hanging straight down and loops around 3-4 times. 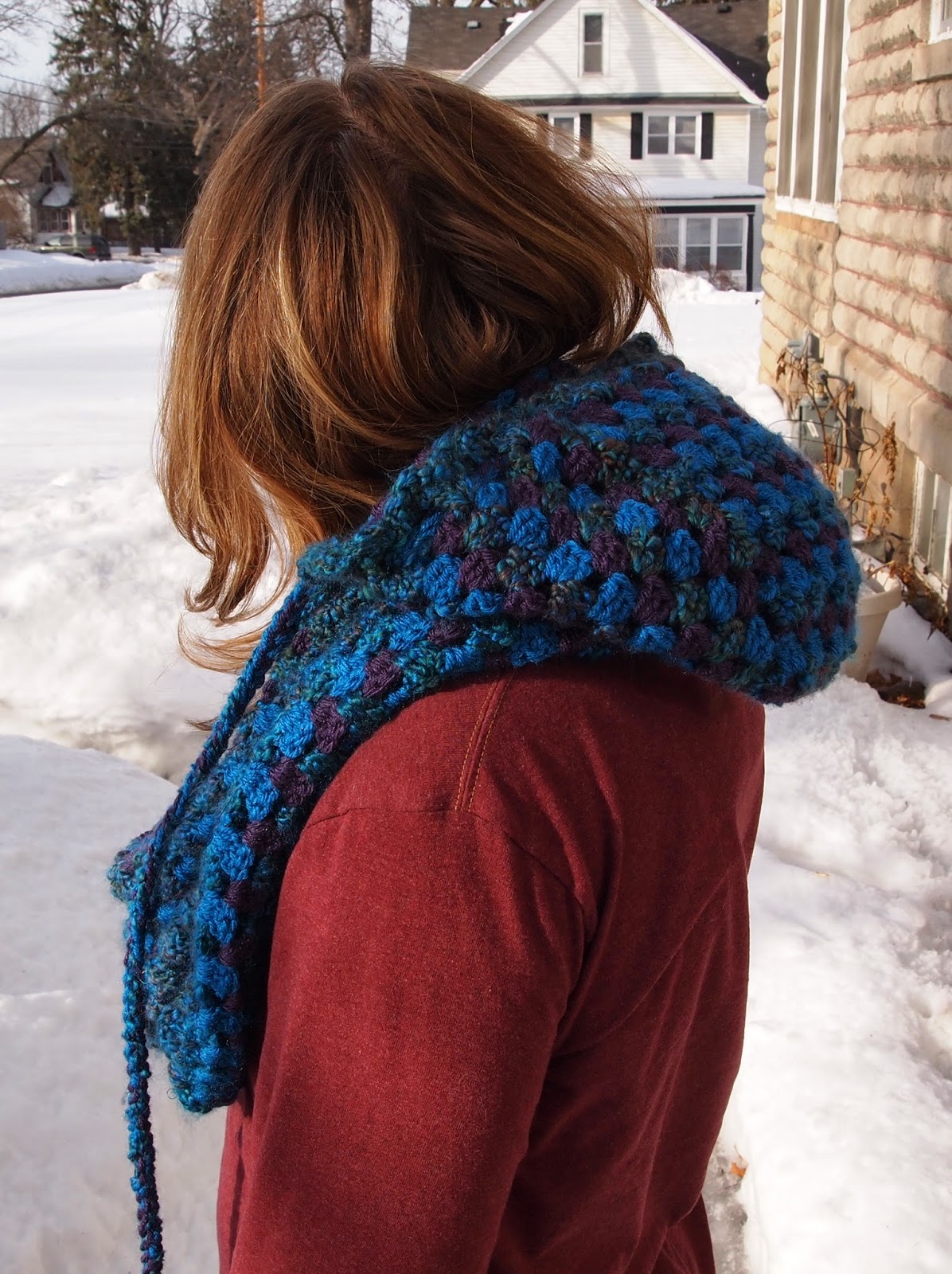 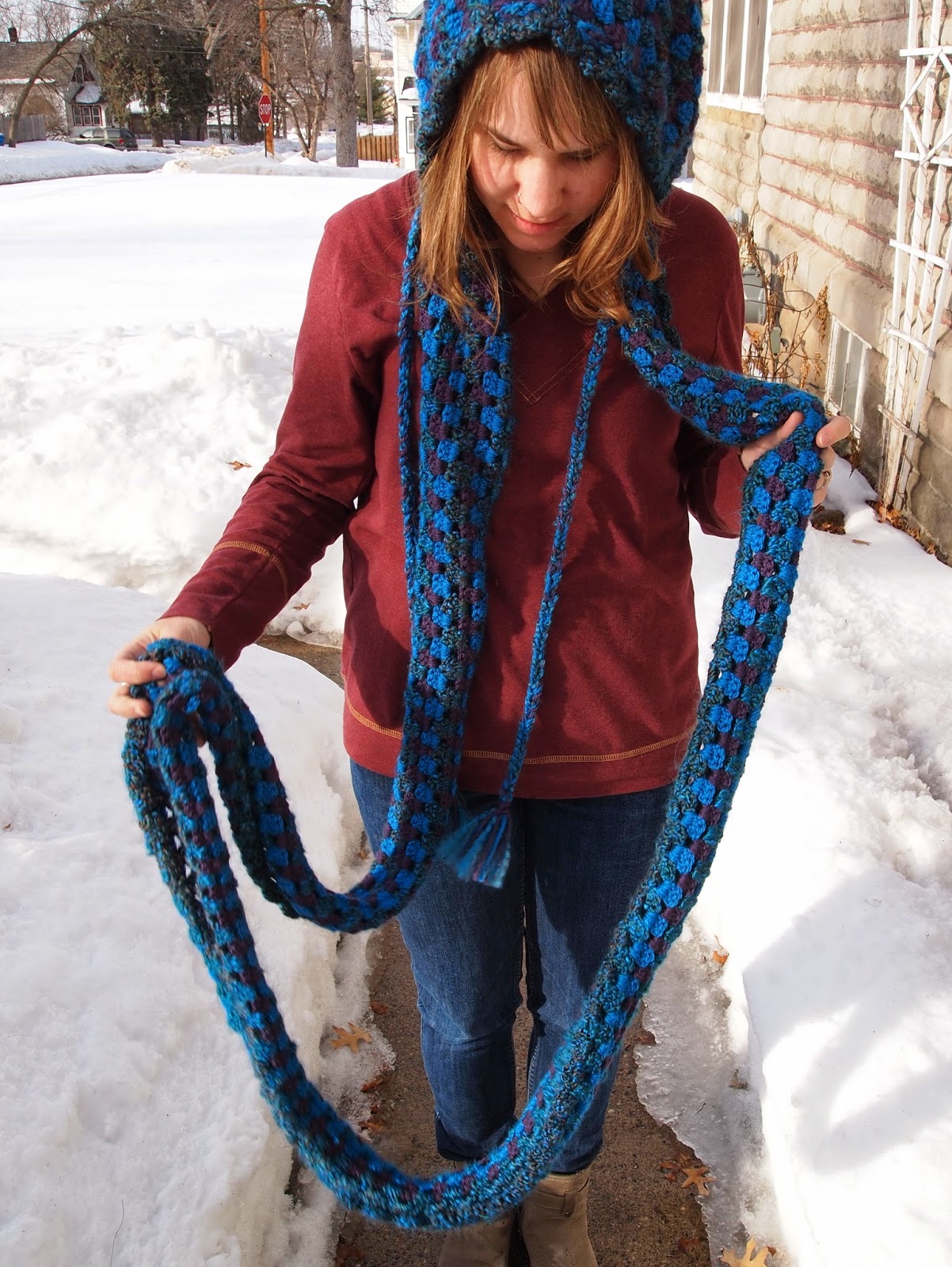 I love this scoodie and am looking forward to making more.  If you are interested in one of your own, feel free to contact me, either through blogger or my Etsy store.  (There isn't much on my Etsy shop right now, but you can send me a message and we can consult on an item.)  Thanks!

My posting has been terrible for a while now, including this event that has now happened one year ago (yesterday) that I never actually finished writing about.  Last year, on February 27th, we lost our kitty Miles.  It was sudden and unexpected, and tough on everyone.   We still miss him so much and while our other three kitties are doing fine, we know that he's irreplaceable.  We miss you Miles! 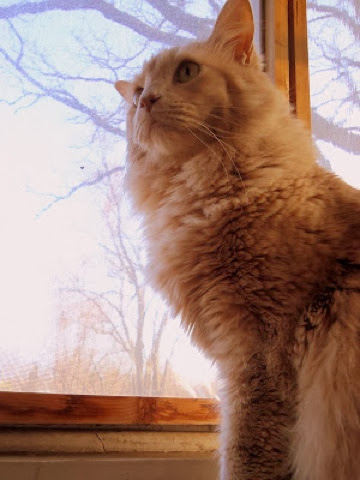 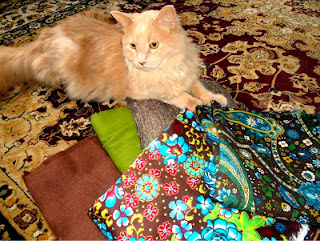 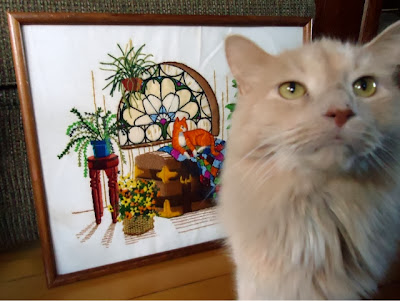 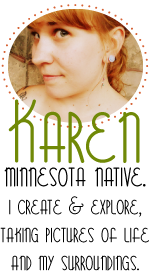 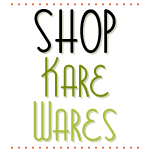